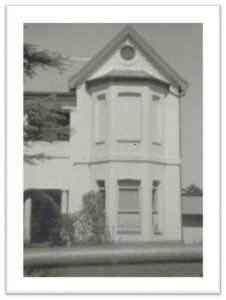 In the 1950s the province acquired a two-storey house in Alexandra Road and, subsequently, the adjoining properties near Alexandra Park. The first 53 pupils began their high school careers in the first of those old residences, 53 Alexandra Road. The remaining houses were later demolished to make way for the construction of Founders’ House which was first occupied in 1966.

The first assembly of the school was held under a magnificent jacaranda tree sited next to the driveway from Alexandra Road to the school hall. Present at the assembly on February 23, 1960 were the Director of Education (Mr L. Beibuyck), the school’s inspector (Mr R. Steer), the first Headmaster (Mr F. H. Udal), the Vice Principal (Mr B. Butler) and five members of staff. Sadly the shady old Jacaranda, known as “The Assembly Tree”, was blown down in a freak storm in 1982. The historic bronze plaque which marked the assembly tree is now housed in the foyer of the school. 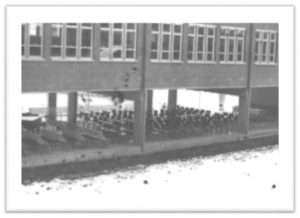 During 1960, work continued on the construction of the present school and in January 1961, the new intake of second formers occupied the middle floor of the south wing. The third form remained in the old house and eventually moved to the new building at the beginning of the second term. Construction continued and the school gradually occupied more and more of the south and middle wings of the school.

In 1961 assemblies were held in the ground floor science laboratory (complete with grand piano) and in 1962 in what was then the music room beneath the hall, now part of the school maintenance workshop. The hall was completed later in 1962 and assemblies have been held there since. 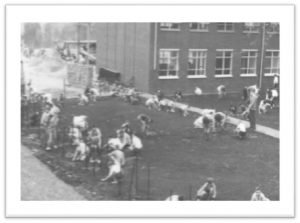 The boys themselves helped to plant lawns and trees. A team of labourers with stonemasonry skills later built the terraces using stone excavated from the levelling of the sports fields. The first athletic sports day took place on 9th September 1961 and was won by Boyd’s with 121 points. Shepstone’s were last with 15!

The first speech day took place at the end of 1961 and was held in what is now the lower ground floor of the middle wing. For a number of years this was an open area with only a concrete floor and pillars supporting the two floors above. All speech days since 1962 have been held in the school hall.

Mr Udal retired at the end of 1969 and was replaced by Mr Richard Hurworth. During his tenure, the school grew considerably both in numbers and in reputation. Founders’ House was full and had a waiting list, school finances were sound and Alex did well on the sports field.

Mr Roy Beaumont followed Mr Hurworth as Headmaster and he was succeeded by Mr Andrew Layman who brought a new vision to the school. In the early 1990s, Alex underwent significant changes, establishing itself as a leader in response to the demands of a ‘new’ South Africa.

The first non-white pupil was admitted in June 1991 into Standard VII, and he, Wiseman Khumalo, was appointed Deputy Head Prefect when he reached standard X in 1994. In the meantime, at the beginning of 1992, the School became co-educational and now boasts a school population which reflects a non-racial, non-sexist society.

Mr Cilliers Haymans took over the reins in 1998 and under his leadership Alexandra High School flourished with an excellent matric pass rate, despite the turmoil and changes in South African education; the character Alexandrians display on and off the sports field; and polished performances in debate and drama.

Mr Andrew Graaf, who matriculated from Alex in 1980, became principal in 2008. His tenure saw Alexandrians becoming involved in the wider community, establishing out-reach programmes and entering in eco-schools initiatives.

When Mr Graaf left at the end of 2015, Alexandra High School opened a new chapter in a history of ground-breaking firsts. In 2017 Mrs Anusha Pillay became the first Lady Principal. She has a clear vision for the future of the school and a passion for shaping young minds.